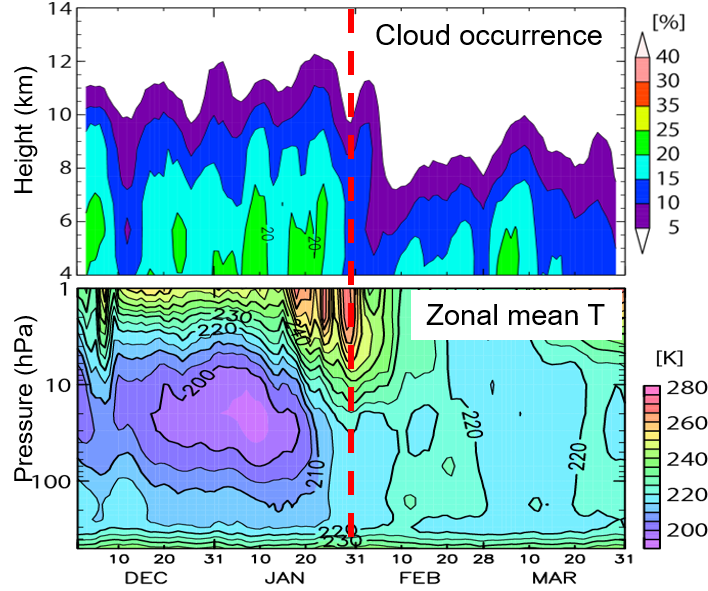 The variability of upper tropospheric clouds during stratospheric sudden warmings (SSWs) in 2009, 2010, and 2012 in the Northern Hemisphere is examined using satellite observations and reanalysis data. It is shown that the zonal mean cloud frequency decreases in the altitude range of 8–12 km, and the mean cloud top height descends soon after an SSW. Following a sudden decrease in upper tropospheric cloud frequency, an increase in temperature and static stability around the tropopause and a downward shift of the tropopause height are simultaneously observed. These changes in the upper troposphere are observed when the downward residual mean flow associated with an SSW becomes stronger around the tropopause level. By means of analyses based on a recent theory of three-dimensional residual mean flow, it is shown that the horizontal structure of the vertical flow is consistent with the geographical distribution of clouds in the altitude range of 9–11 km. Another interesting feature is that the low cloud frequency in the upper troposphere that starts after an SSW continues for more than 1 month. Possible reasons are discussed in terms of a long radiative relaxation time and a change in the tropospheric wave activity. These findings indicate that SSWs can affect the tropospheric radiative budget through the modification of cloud frequency and cloud top heights.